: of, relating to, or marked by retribution 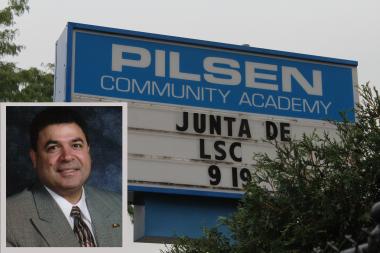 Last week I was informed that one of the local school council (LSC) members at Pilsen Academy would be leaving the elementary school. Mr. Miguel Salgado is listed as the bilingual coordinator and was slated to be the 5th grade teacher, but he recently received a letter from the principal, Dr. Adel Ali, that his position was being closed. His brother, Mr. David Salgado, also teaches at the school and was slated to be the 1st grade teacher. He also received a similar letter. What elementary school doesn’t need a 1st or 5th grade teacher? What majority Latino elementary school can afford to lose a bilingual teacher and coordinator and two great Latino teachers at a time when the CPS teaching population is already under-representing Latinos? One where the principal treats the school like it’s a Game of Thrones and treats his $140k/yr position like an Iron Throne. Apparently, anyone who doesn’t bend the knee gets the ax.

What did Miguel and his brother do to offend his royal highness? Miguel failed to vote with the principal 100% of the time. The betrayal! And his brother, is just his brother. Here’s an example of such a betrayal:

All of the parents (except one; see below) on the LSC wanted to replace the council’s absentee community representative. She was absent for most of the year so the majority of us voted her off, including Miguel. The community member happened to be friendly with the principal. This so enraged the principal that he stormed out of the last LSC meeting of the year 15 minutes before it was over. Everyone was confused. Parents had come to the meeting to ask Ali about his plans for the next school year. It was on the agenda and without the principal we had lost quorum to amend the agenda. The Deputy Director of LSC Relations, Jose Villasenor, happened to be present and coached us through an awkward conclusion to the meeting. It was weird.

Aside from occasionally removing the press and himself from public meetings you might ask, “Could there be more?” Yes, in fact. There is.

I was elected to the Pilsen Academy LSC as a community representative a little over a year ago. I thought my time spent training to be a high school math teacher, time spent as calculus and statistics TA/lecturer at UIC, my PhD in statistics, and my experience in industry as a data scientist could be helpful to my neighborhood elementary school that claims to be a computer science academy. But I had never served on a local school council and so I had a few basic questions about our duties. Those duties are mostly concerned with hiring and firing the principal and helping to manage the budget. Given that I’m charged with the first duty you’d expect that the principal would help me understand the second duty.

One meeting I asked about the budget. There was a line that said something like, “Bucket Line Pointer - something something - $500”. I asked, “What’s a bucket line pointer?” Paraphrasing here…

Ali responds, “What are you talking about? It says it right there!”

“Where? I see it says bucket line pointer, but I don’t know what that means.”

This happened a couple more times. I would have some basic question about basic procedure, get yelled at in the middle of a public meeting, and then I’d have to abstain from voting on something I knew nothing about. At some point, one of the agenda items required my vote to pass. Paraphrasing: “Well it’s your fault when we have to meet again!” Okay Joffrey.

Why would a principal be so rude to one of the people who is responsible for renewing his contract? It doesn’t make sense. I initially heard he was repeatedly barking at me in public because I had previously worked with Pilsen Alliance, and for whatever reason, he didn’t like them. I could sympathize. But this is where it gets really crazy, so hold on.

As my relationship with Pilsen Alliance was falling apart, two members of Pilsen Alliance called me into their office: Vicky Lugo and an Unnamed Gentleman who has asked to remain nameless. In one of the most bizarre meetings I’ve ever experienced, these two introduced me to a third woman who wanted to donate money on behalf of an organization that she wouldn’t name to Pilsen Academy while promising to route it through a non-profit dance studio. They asked if I could help. I suggested that they ask the principal publicly at the next LSC meeting. So as to establish that this isn’t just hearsay, here’s the Facebook email that followed that meeting. I’ve blocked the name of the Unnamed Gentleman, the mysterious representative, and the text. The text of a person’s email is considered copyright and without permission I can’t post it here. I can forward it to you if you’re interested.

So at the next LSC meeting, my first one as an official member, the principal ends the meeting by saying that he has to meet with Vicky Lugo and the Unnamed Gentleman to discuss this donation. My best guess is that this person worked for Sims Metal Management and they were trying to buy my favor.

For those of you new to Pilsen’s local politics, Pilsen Alliance was campaigning against a new metal shredder in the neighborhood based on health concerns, while cheering on the existing metal shredder Sims. I’ve dubbed this kind of activity g_reen-washed crony capitalism_. Clever, I know. When I realized I was the only one in the organization troubled by this lack of consistency, our relationship fell apart.

I’ve previously cataloged the cozy relationship between Sims and Pilsen Alliance here, here, and here. And for good measure here’s a picture of the members of Pilsen Alliance happily taking a tour of the shredding facility, curiously posted on their own website:

What happened next suggests that Pilsen Alliance and Dr. Ali have taken the handling of the Sims money as an opportunity, to not only reconcile their relationship, but to develop a mutually beneficial working relationship. The cost of that relationship appears to be Miguel and David’s jobs.

Over the next two months Vicky showed up to the LSC meetings. At one point she made a 5 minute long comment about how great it is that our principal is board certified… in English. And then another 5 minute speech in Spanish. While public comments are capped at 2 minutes, there’s endless time to sing the King’s praises.

Fast forward 7 months: Immediately before the principal review is to take place Vicky submits an application to join the LSC. We vote immediately and everyone but me votes for her to join the council. They had seen her around, I understood. Another woman submitted the same application at the same time, but she couldn’t even be bothered to show up. The principal was angry that no one was voting for her. Paraphrasing again:

“Because I don’t even know who this person is!”

“You know Vicky! You didn’t vote her on!”

We didn’t vote this second woman on to the council.

While it’s illegal to talk about what happens in the confidential principal evaluation proceedings BECAUSE THERE ARE EMPLOYEES EVALUATING THEIR BOSS AND THEIR JOBS COULD BE ON THE LINE, it became clear immediately after the evaluation sessions that someone wasn’t following the law. The parent, teacher, and faculty members of the LSC were each called individually into the principal’s office and asked very specific questions following the evaluation sessions. When it came time for the LSC to approve the evaluation, Vicky stated publicly that she didn’t think the evaluation was fair to principal and that we should start over and redo the multiple 3 and 4-hour long meetings. The evaluation was approved. Then Vicky’s child graduated 8th grade. She left the LSC after serving in only 2 LSC meetings.

So what did she have to gain from all of this? I’m not sure. The Unnamed Gentleman from Pilsen Alliance did recently get a job as a faculty member at the school. And they say there’s no patronage jobs left in Chicago!

If you’d like to see the next chapter of this drama unfold there will be an LSC meeting at 9am this Friday, August 28th. Parents and teachers are not happy about their neighborhood school continuously losing good teachers because the principal can’t handle a minor difference of opinion. Hopefully King… er, Dr. Ali doesn’t ditch out on the meeting this time.