As usual, my long absence from writing has run concurrently with life being busy. Since my last post, PERRO has had three lead water filter distributions and is preparing for a fourth. I’ve been promoted to Executive Architect at IBM. The gut rehab of my new home has provided a constant source of excitement, entertainment, and drama. If all that wasn’t enough to convince you of my busyness, then the following should.

… an AI R&D accelerator that tackles knowledge gaps useful to the space program. The program is an intense 8-week concentrated study on topics not only important to NASA, but also to humanity’s future.

Unfortunately, due me buying a house and needing a shitty job at Sears, I couldn’t make it work to participate. Of course, there was a relevant Onion headline for the occasion that hit too close to home:

This year was different. IBM was a sponsor and my employer. Through some bureaucratic magic, I was able to get my Technical Evangelist schedule light enough to serve as a mentor!

I have to say, my summer at “space camp” was worth the 25 year wait! I stayed with the participants at the Lodge at NASA Ames in Mountain View, California. Ames Research Center is a special NASA Base for a few reasons. It was originally an Air Force base back when there airships in the Air Force; aka zeppelins. So there’s an airship hanger there! It’s also the only NASA facility with a bar; the Space Bar! Good local beer and food at a reasonable price! Gotta throw in one vacation photo :)

Even cooler was the fact that we got to work out of the SETI (Search for Extraterrestrial Intelligence) facility. Wemet Jill Tarter, the scientist that was the inspiration for Jodie Foster’s character in Contact!

This year there were 6 teams that focused on planetary defense, space resources, and space weather. I mentored the Solar Storm Space Weather team. We used deep learning computer vision algorithms with Solar Dynamics Observatory (SDO) AIA/HMI data to predict solar flares. It helped tremendously that the other mentors for the space weather team are the principal investigators for the AIA part of the SDO mission; Mark Cheung and Monica Bobra.

My team consisted of 3 Python and 2 R developers. In addition to mentoring the team (you’ve got to normalize your inputs to a neural network!), I added to my mission two goals:

I won’t go into too many details; the team’s final presentation is here:

The bad news is: Despite my best efforts, they managed to put results from an overfitted model into the presentation at the last minute. Take care in managing your testing and validation sets in time-series models.

The good news is: We sorted it out and there is still work to be done! Predicting the sun’s physics turns out to be a difficult problem.

I’ve given a couple of talks about the experience. The slides and most of the code are here on github. There is video somewhere. I’ll post it when I find it.

If you want to work with me on deep learning in R and predicting solar flares, shoot me a message. Otherwise, I’ll just leave you with my favorite picture from the summer; a false color image I made of the sun using PCA. 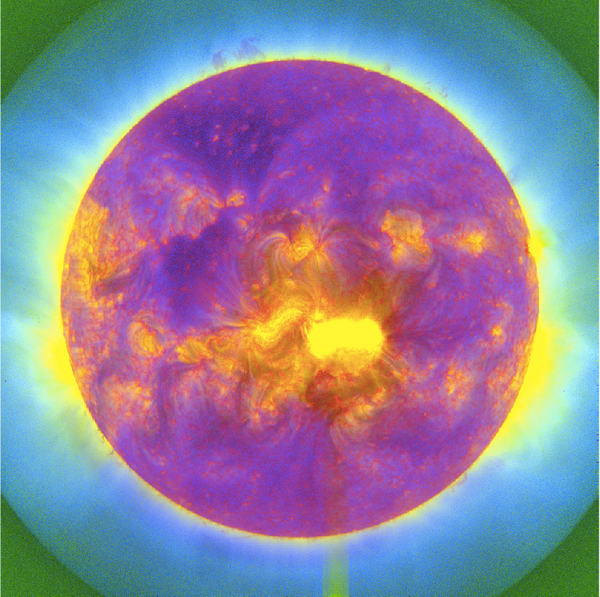