7 years ago I wrote Alderman Solis Slays the Paper Tiger about the 25th Ward’s property development and the associated questionable reporting. Despite a federal investigation taking down the ward’s alderman (by way of campaign contributions made by property developers) AND a mayoral campaign against aldermanic prerogative, many of our city’s reporters continue to make the same mistakes. This time, instead of rich people losing greenspace, low-income people are losing affordable housing.

Following the death of Pilsen’s Landmark District and with little relative coverage, consisting only of a single article from Crain’s Business Chicago, demolitions resumed along 18th St in Pilsen. For those who can’t/won’t pay to read the article, here’s the summary:

For those who haven’t been following along…

Pilsen’s last alderman, Danny Solis, created a Historic Preservation District along 18th St and the surrounding area. The idea was that the community could maintain its character and affordable housing stock by keeping its aging buildings in place. The new alderman, Byron Sigcho, was against the Landmark District… get this, because he claimed to want to maintain affordable housing and stop gentrification!

So how does a high-profile fight to ostensibly maintain affordable housing and stop gentrification lead to the immediate loss of 17 affordable units and the construction of 9 new luxury units? How does the usually fiery rhetoric of a Democratic Socialist politician, someone who previously called for 100% of new construction to be affordable, transform into a muted explanation of the profit motive?

these developers saw it would still be profitable for them, with the fees.

If even his usually friendly reporters at Injustice Watch and Jacobin could see that this was going to have the opposite of the purported effect, why push this through? 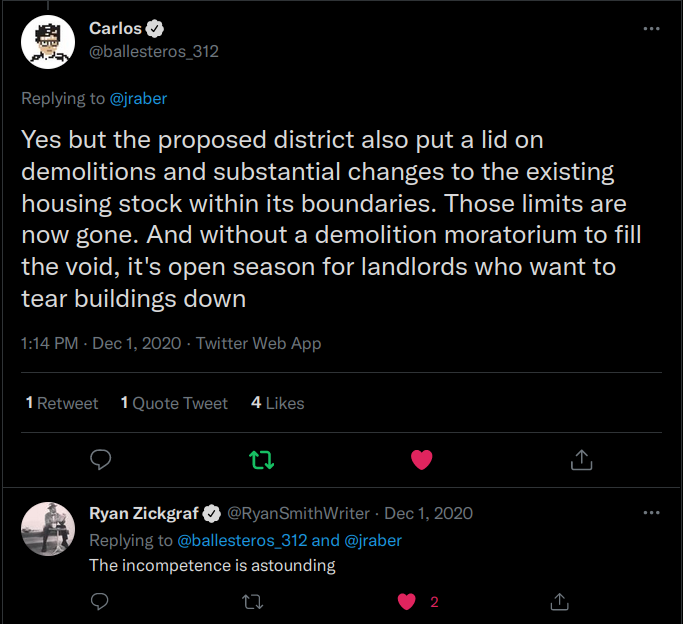 Throughout his municipal election campaign, candidate Byron Sigcho declared that:

I have made a commitment to not accept contributions from big corporations or developers.

Upon entering office however, that changed. Within his first 6 months Sigcho collected over $10,000 in campaign contributions from corporations and property developers.

He was also happy to be fêted by the real estate industry:

over cocktails, developers and brokers took turns introducing themselves to Sigcho-Lopez… It was one of a few recent interactions that have provided some comfort to real estate professionals since they watched the former head of the Pilsen Alliance neighborhood group win the race on April 2.

That’s why I found it curious that Ald. Sigcho and his allies created much ado about killing the historic landmark district with protests, meetings, car parades, and the raid of an alderman’s restaurant kitchen. It was clear to anyone with a modicum of critical thinking that killing the district was going to have the opposite of the stated effect.

This was also covered by many news outlets in curious ways. I couldn’t find one story that mentioned Sigcho’s new cozy relationship with real estate industry. And not only was this effort’s coverage decontextualized from these campaign contributions and developer relationships, the effort itself was entirely performative.

How was it entirely performative? Let me explain.

For those unfamiliar with aldermanic prerogative and its effects on zoning our city, I highly recommend this 2008 series from Dan Mihalopoulos, Robert Becker and Darnell Little at the Tribune. I summarized it back in 2014:

Aldermen are the executives of their ward. If an alderman wants to change the zoning in their ward, other alderman do not to challenge it. To be precise, “aldermanic prerogative” was overruled 15 times out of 5700 (a rate of 0.2% or 1/5 of 1%) on zoning issues.

7 years ago I wrote about some questionable reporting by, then the new Pilsen/West Loop reporter at DNAinfo and current editor at Block Club Chicago, Stephanie Lulay in my blog post similarly titled Alderman Solis Slays the Paper Tiger. (I should note that, unlike Ald. Sigcho, Ald. Solis never sent his spokesperson to launch personal attacks at me in the comments section of a Facebook post while simultaneously failing to declare their relationship.) Lulay reported on Alderman Solis’s intrepid fight to keep the green space adjacent to a restaurant in the West Loop from being developed into “luxury condos”. The context missing from this article was:

The lack of this context was frustrating, but especially so given that I was collecting signatures to get on the ballot for the aldermanic elections at the time and had multiple residents decline to sign my petition because they felt they needed Solis to keep their greenspace.

The reality of the West Loop situation was that:

Regardless of whether this sloppy reporting was due to naivete or bad-faith access journalism, we’ll probably never know. What we do know is that the West Loop greenspace is now luxury condos, just as the property developer’s campaign contributions guaranteed.

Over the last 7 years people started paying attention to aldermanic prerogative a bit more. It became a key issue in the city elections 2 years ago. The mayor vowed to end the practice and the corruption, conflicts of interest, and ridiculous zoning changes with it. The City Council had a different opinion on how things should go. It’s one thing to change laws and ordinances, it’s another to change customs and culture; aldermanic prerogative is the latter.

All that background is necessary to understand why the coverage surrounding the Pilsen Landmark District felt like Bill Murray’s Groundhog Day.

Once Ald. Sigcho decided he was against the Landmark District, the issue was effectively dead. The Daily Line published fantastic reporting in September on aldermanic prerogative explicitly reporting this:

aldermanic prerogative still rules over most issues decided by City Council votes. While Lightfoot spoke last year of reforming the zoning process to take “veto” power from aldermen, the mayor has not publicly mentioned the effort in months, and aldermen say such a proposal has little chance of passing.

They also reported that:

zoning committee chair Ald. Tom Tunney (44), who asks for the endorsement of local aldermen before bringing any proposal to a vote before his committee, said in July he would help Sigcho-Lopez with city officials to scuttle the historic district proposal.

If you take Ald. Tunney at his word then that means the antics of Ald. Sigcho and his supporters were completely unnecessary and were just a cynical effort to get more press coverage… which clearly worked: 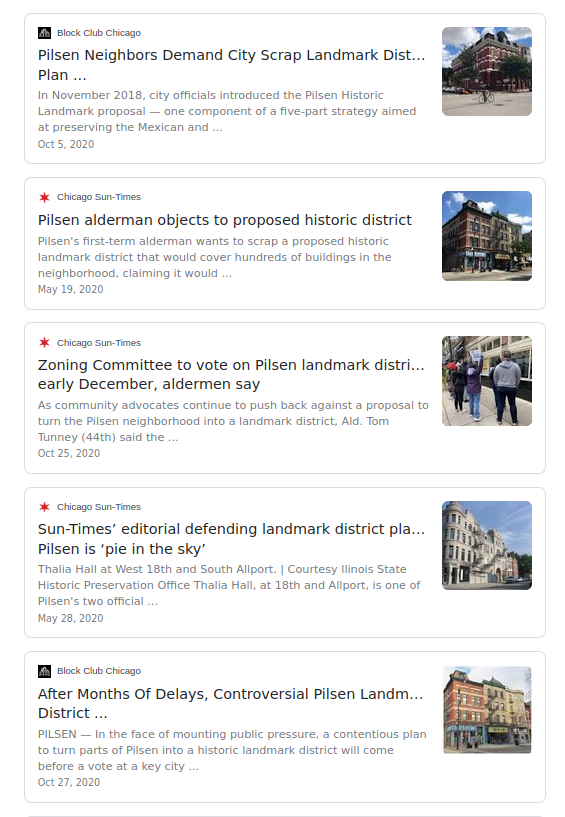 You can also choose to believe Sigcho, but it’s worth noting that he was once again caught lying, this time about aldermanic prerogative, while being interviewed for the Daily Line’s story:

Sigcho-Lopez pointed to two local issues on which residents are “seeing the consequences” of the administration’s tighter grip on local issues. City licensing officials proposed lifting a liquor moratorium on Blue Island Avenue without Sigcho-Lopez’s consent… But the liquor moratorium was never lifted, because Ald. Emma Mitts (37), who chairs the City Council’s license committee, did not bring it up for a vote.

Ald. Sigcho proposed replacing the Landmark District with a demolition moratorium. That was voted down during the same meeting. Reasons given for the failure were two-fold. First, the city’s law office suggested that the only legal way to prevent demolitions is via a historic preservation district. Second, and more embarrassing, aldermanic prerogative. Part of the demolition moratorium was in another ward and that ward’s alderman opposed it. As Jacobin contributor Ryan Zickgraf wrote on Twitter above, “The incompetence is astounding.” But is it incompetence?

I don’t mean to alarm you, but politicians will sometimes say one thing and do another. There are many explanations for the alderman’s actions, incompetence being perhaps the most generous. His flip-flop on property developer campaign contributions suggests that the purpose of killing the Historic Landmark District may have been part of a good ol' fashioned Chicago pay-to-play operation.

Back in September of 2019 I showed how Sigcho accepted money from a property developer, Michael Ezgur, doing business in the ward. I was a little confused at the time as to why a property developer would donate to an alderman in the absence of aldermanic prerogative. The Daily Line article answered that question. Again:

zoning committee chair Ald. Tom Tunney (44) … asks for the endorsement of local aldermen before bringing any proposal to a vote before his committee… aldermanic prerogative still rules over most issues decided by City Council votes.

That bit of knowledge also suggests a connection between the multiple contributions to the alderman from various Chinatown grocers and the zoning change at 17th and Stewart that went through last year for a “47,000 square foot retail and wholesale grocery store” being developed by New China Real Estate.

Yue Qin Mei donated $2500 and is listed at 2104 S Archer Ave. That’s not a residency. That’s Mayflower Food Inc… There’s also a Happy Market, Inc. donating $500. It looks like the alderman understands competition after all! Competition within the Chinatown grocery market for his aldermanic affection!

To be fair, it’s possible that these grocers aren’t involved in the New China Real Estate grocery store. I’ve found however that business owners tend to be pragmatic and rational, so this seems unlikely.

Additionally, we already know that Alderman Sigcho launders money to circumvent campaign finance laws from this SunTimes investigation. So you can imagine the alderman isn’t above obfuscating his other pay-to-play activities. 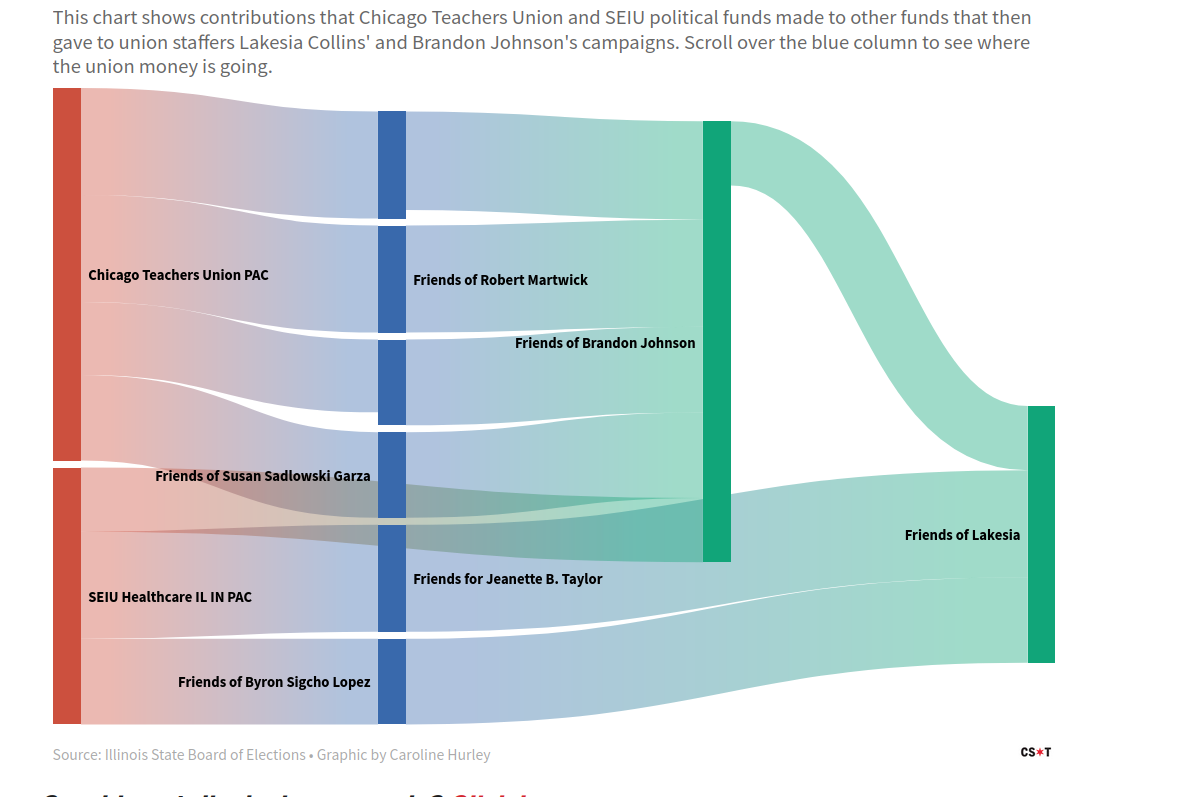 Nor is the alderman above accusing others of activity he himself is guilty of: 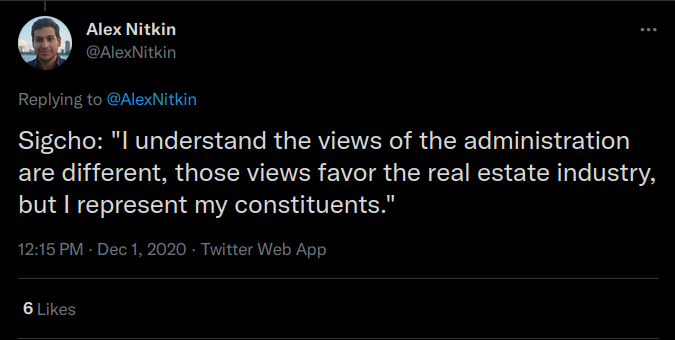 It should almost be crime a that “journalists” fail to call out this blatant hypocrisy.

Extending this pattern to the demolition of buildings on 18th St, it’d be much more profitable for property developers to contribute to an aldermanic campaign and build new luxury units than to rehab old ones. Additionally, there is a strong non-profit industrial complex (NPIC) in Pilsen and in Chicago more generally. The NPIC grift works like this:

This tactic might remind you of the Big Store con made famous by the movie, The Sting, and you’d be right. Regular attendees of these choreographed public meetings eventually catch on and become cynical. Infrequent attendees and journalists fall for it all the time.

I’ve seen this many times in Pilsen. So it was particularly entertaining to see Vicky Lugo advocating against the district. In my time with Pilsen Alliance, she regularly complained about not getting paid for her “volunteering”. She is also infamous to the members of the 2014-16 Pilsen Academy LSC where she schmoozed her way on to the LSC for a short time. She was subsequently accused of texting our antagonistic principal the proceedings of his “confidential” review. Our LSC teacher representative and his brother were laid off shortly following Lugo’s alleged antics.

For another example of her grifting, here she is touring a metal shredding facility with other members of Pilsen Alliance: 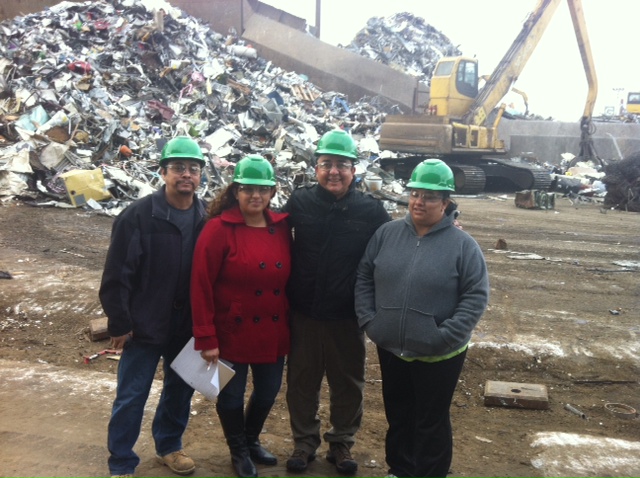 SIMS, the current shredder, operates west of Ashland, at 2500 S. Wood. SIMS is an international, publicly traded corporation with a clean record by the Environmental Protection Agency. Sims is also a unionized company, offering living wages and benefits operating under high safety standards.

It should be noted that SIMS does not have a “clean record by the Environmental Protection Agency”. I’ve previously written about an employee of Pilsen Alliance telling me:

Don’t say anything bad about Sims… their lawyer will stop giving us money.

Finally, here is Ms. Lugo on ABC 7 advocating against the landmark district: 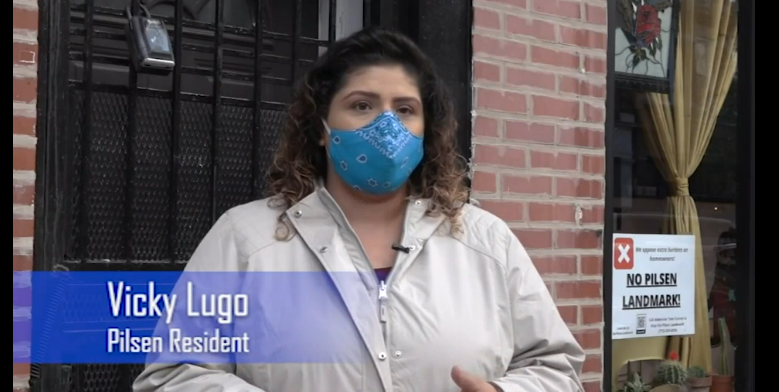 All this is just background that hints at how the alderman and his allies work to sway public opinion. So, in the meeting where the district was voted on, when Ald. Cappleman suggested that:

it’s clear Pilsen community is opposed to landmark district, but says it’s “not clear” their view is “informed” wrt landmarking leading to gentrification.

… the misleading and misinforming is part of the playbook.

There you have it. Not much has changed in Chicago or Pilsen in the last decade that I’ve been doing my unpaid volunteering. Alderman collect real estate cash. Newspapers dependent on that real estate cash turn a blind eye. Naive or complicit journalists sell the public on some bizarro version of reality. The neighborhood gets sold off without too many people noticing until the demolitions start and by then it’s too late. 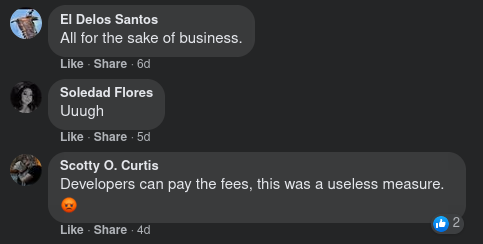 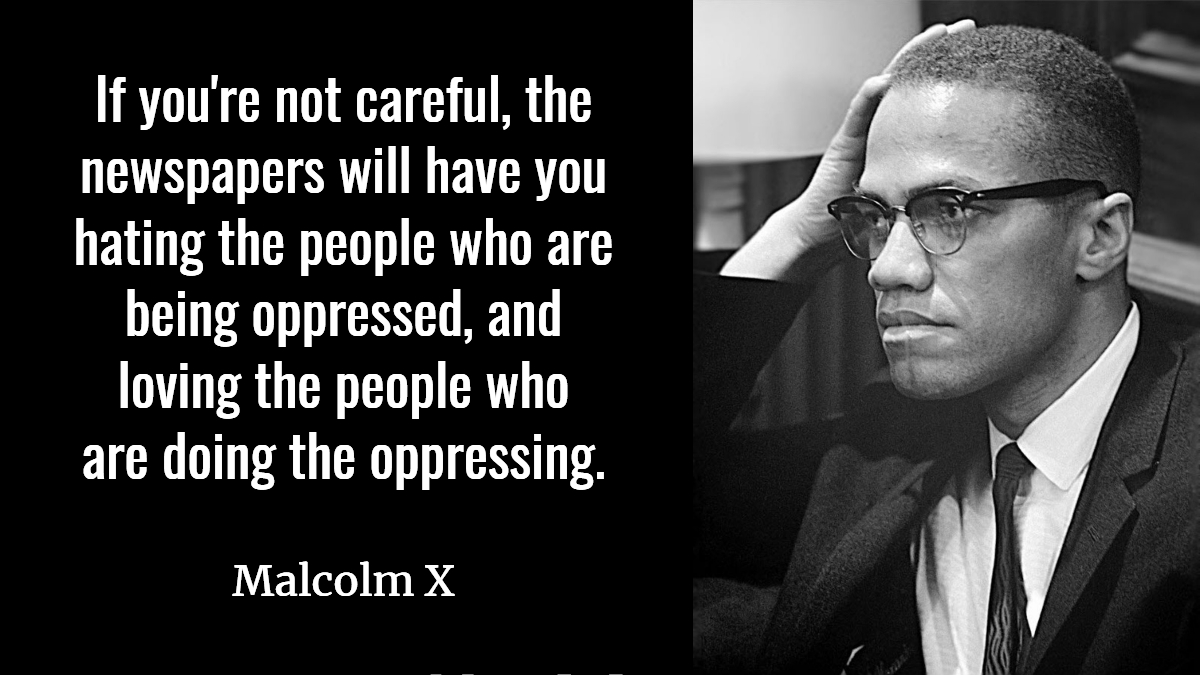