On Tuesday, WGN posted this poll about crime in the city: 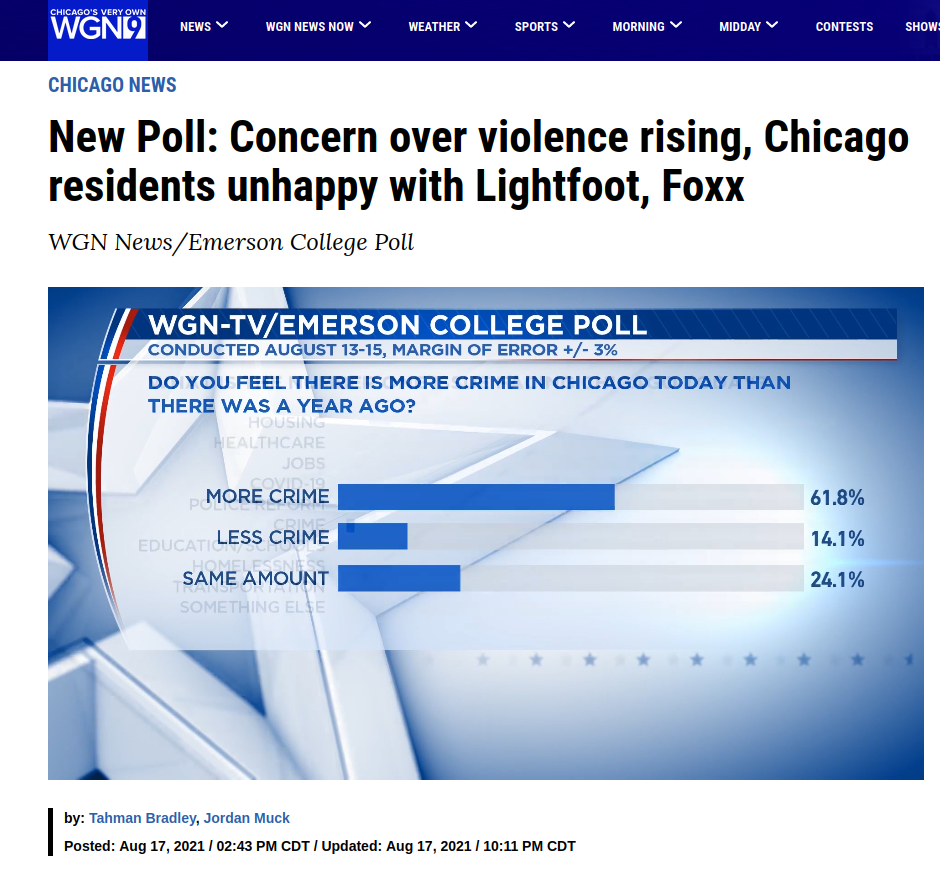 I love these sorts of polls because:

I’ve previously written about this issue. The first time I wrote about violent crime in Chicago dropping by 44% from 2001 to 2018. This hit the top of the Chicago subreddit. The second post showed that, between 2002 and 2018, crime was down 20% citywide and down per capita in 72 of the 77 community areas.

To reuse my previous overview:

I refer to an insight from a book that examines the media’s relationship with politics, Hate Inc. by Matt Taibbi:

Every crime reporter will tell you there are two major outlets for national crime statistics, particularly violent crime: the annual reports by the FBI, and the Bureau of Justice Statistics. Both are outputs of the Department of Justice, but the BJS uses the same methodology every year (it’s based upon broad surveys of households, asking people if they were victims of crimes) and tends to report less alarming statistics. Newspapers inevitably use FBI stats, which use varying methodologies and somehow always come out a little scarier. Going by the FBI, violent crime fell 49% between 1993 and 2017. By the BJS, violent crime fell 74% during the same period. But the public doesn’t believe it.

… Naturally, as a data scientist, I went looking for data. And it exists! The Chicago Data Portal has a dashboard with crime data from 2001 until the present. The dashboard provided wasn’t very useful, so I just downloaded the data and analyzed it below using my usual tool, the open-source programming language R. If you dig into the documentation you’ll find that this data is of the headline-grabbing FBI variety; i.e. FBI’s Uniform Crime Reporting Program.

With this data it’s fairly easy for someone like me to pull some rough statistics. That said, I’m no criminologist. As I’ve talked about before, there are many ways to play with these numbers. But it’s hard to juice statistics over the course of 20 years and 3 mayors. So treat these stats with some skepticism, but hopefully with less skepticism than a poll asking people if they think crime is up ;)

This first plot shows the total number of crimes from 2002 until 2021, with 2021 data being extrapolated using the first 7 months. 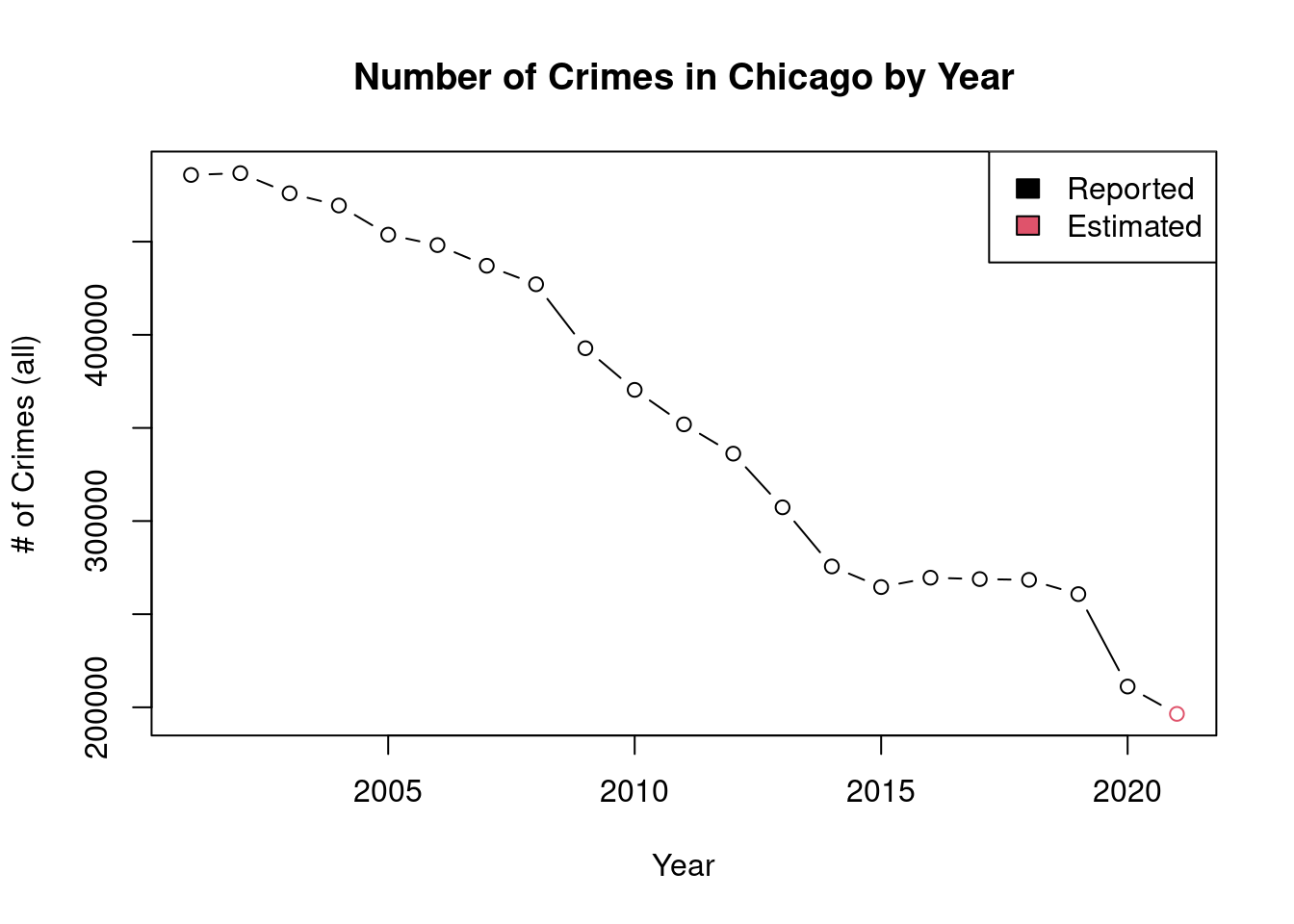 Oh my. It appears 86% of Chicagoans are wrong. There is not more or the same amount of crime in Chicago today as a year ago. There is actually 7% less crime. This is a record low! Yay!

I wonder how Chicagoans could be so misinformed? Hmmm. After listening to a variety of local news broadcasts (WBEZ, CBS2, Chicago Tribune, Crain’s) almost every day, I suspect it may be due to their incessant coverage of the bloodiest news. We’ve all seen this in the COVID coverage over the last year and half. From a March 2021 NYTimes article titled, Bad News Bias:

What about violent crimes? Violent crimes include: assault, battery, homicide, robbery, and criminal sexual assault. Maybe that’s why people have the sense that crime rates are up in the city.? 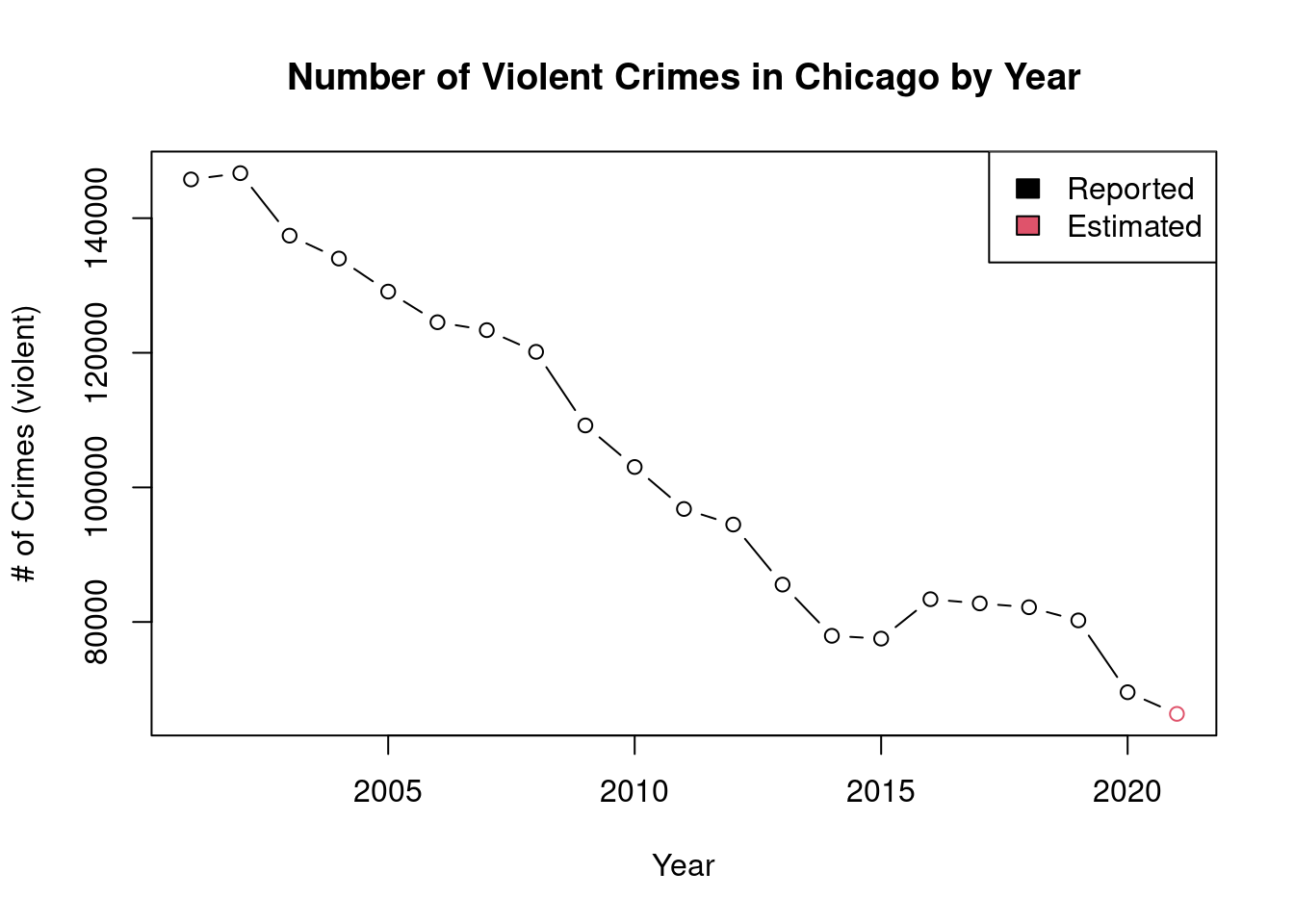 Nope. Violent crime, just like all crime, is at a 20-year low! 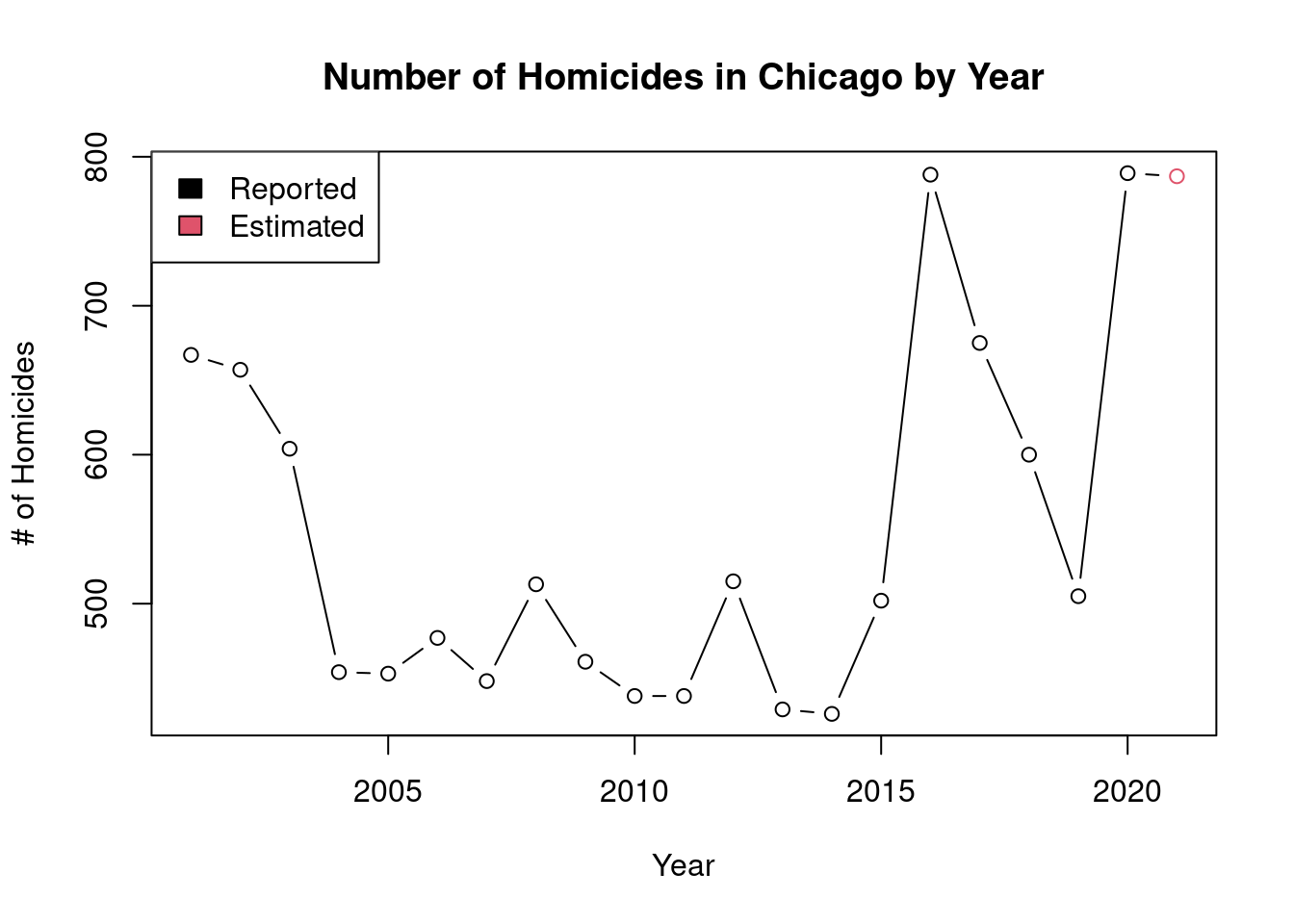 Here we go. This is the carnage we’re all hearing about. Homicides are near a 20-year high. With an estimated 787 homicides to occur this year and a population of 2.75 million people, that would put us at 28.62 homicides per 100,000 people. Relative to the available 2019 FBI crime stats for every city, this would make us the tenth deadliest city in the USA; right between Memphis and Cleveland. At least we’re not St. Louis with almost 65 homicides per 100,000 people.

Most people know that Chicago is one of the most segregated cities in the country. You don’t need a degree in criminology to know that the South and West Sides typically have more crime than a neighborhood like Lakeview. With 86% of Chicagoans thinking crime is flat or up and 2/3rds of people thinking the news is either adequately or under-reporting crime, I suspect there are a lot of people living in the nice parts of town thinking they’re under siege and need more police.

This reminds me of Paul Krugman’s classic response to demands to raise the retirement age for Social Security due to rising life expectancy (emphasis mine):

The rise in life expectancy, it turns out, is overwhelmingly a story about affluent, well-educated Americans. Those with lower incomes and less education have, at best, seen hardly any rise in life expectancy at age 65; in fact, those with less education have seen their life expectancy decline. So this common argument amounts, in effect, to the notion that we can’t let janitors retire because lawyers are living longer. And lower-income Americans, in case you haven’t noticed, are the people who need Social Security most.

Is it the case that Lakeview residents want more police because Garfield Park residents are being killed? Let’s see.