I’m running for alderman of the 25th Ward of Chicago.

The first question people always ask is, “Why?” The short answer is that I love this city, I love this ward, I love this neighborhood, and I think it could be so much better.

The long answer is that a lot of people have invested a lot into me, and in these last few years that investment has paid off… for me.  I’ve got a great job at IBM. I’ve been able to buy a beautiful (or slowly being rehab-ed back into being a beautiful) house. I’ve been able to pay down enough of my student loans so that I’m no longer in the red.

With all of that success I want to give back.

“To whom much is given, much will be required.”

A lot of people have given to me so that I could be successful.  My parents helped pay what they could, when they could, so that I could be the first in the family to get a bachelor’s degree. My sister cosigned on a student loan with me.  During the recession back in 2002, we lost our home and I had to pack up my stuff and move into the city.  It was hard to find work, but my oldest brother helped me get a job. Granted, it was working in a meat locker (easily the worst job I’ve ever had), but I didn’t starve! I had a job!  While I was earning my PhD in statistics and machine learning, the state and federal governments funded my research for 7 years.  When the gut rehab of my home went sideways, my friend stepped up and helped me demo the house, asking for nothing but a couple of beers and a few hotdogs.

All of that investment has paid off.  So now what?

I started giving back what I could by joining PERRO (the Pilsen Environmental Rights and Reform Organization). We’ve worked on cleaning up the metal shredder in the neighborhood.  When the city failed to warn people about the lead in their water from water main replacements, we stepped up and delivered water filters good for a year to 300 families in the neighborhood.

I served for 4 years on the Pilsen Academy Local School Council (LSC); 2 as secretary.  After my first meeting, the president of the LSC, a parent named Elvira, and a teacher representative named Miguel stopped me and asked me to help them get rid of this crazy principal. We busted our butts for over a year to get rid of that guy. It got to the point where I was studying Illinois state law late at night to show that his use of CPS policy was violating the Open Meetings Act.  Finally, after threatening to call ICE on an undocumented parent, we wrote a letter to CPS and he was escorted from the building by security. We hired a new principal and while I didn’t always agree with her, our school rating improved, going from a Level 2 to a Level 1+ SQRP rating.

Last year, I volunteered my summer to be an AI mentor at the NASA Frontier Development Lab at NASA Ames in Mountain View, CA.  We used machine learning and computer vision algorithms to predict solar flares to improve our satellites and to prevent our astronauts from being irradiated. That’s a tough problem and requires more than 8 weeks to solve. So I’ve continued that work as an AI advisor to the program and locally as a mentor for the Chicago Astrostatistics group. I got involved with the astrostatistics group via collaborations between R-Ladies Chicago and the Chicago R User Group (CRUG).  I’m one of organizers for CRUG; a group devoted to spreading the love of the R open source statistical programming language. Pretty nerdy, but we do good stuff.

What I’ve learned over the years studying and working in politics is that if you want to make a difference, it helps to be an elected official.  Lead in the water is a city-wide issue, not just a Pilsen issue.  PERRO is a volunteer organization and doesn’t have the resources of the City of Chicago.  Without being elected to the LSC, there’s no way we could’ve gotten rid of that awful principal.

What would I focus on?  As an alderman I would first work on changing the rules of the game. As Ice-T said,

Everyone in the news talks about Russia hacking our elections. What they don’t talk about is that our elections have been getting hacked for decades by politicians and big business working together.

The entire city, and especially this ward, is ridiculously gerrymandered. It reminds of Yakov Smirnov:

In Chicago, you don’t pick politicians.

This ward is so ridiculous that I made the ward map part of the campaign logo. One should ask, “In a thoroughly, capital ‘D’, Democratic city like Chicago, who are these lawmakers gerrymandering against?” It ain’t the Republicans. It’s us! The voters! The alderman regularly gets 40-45% of vote in Pilsen, which was ordered by a court to be in a single ward. After 20 years we know him well. The courts haven’t said anything about Chinese-Americans, so they get split in two. There’s a lot of property development going on in the West Loop and South Loop. If you split those neighborhoods between 3 or 4 wards, the residents can’t organize effectively, and the property developers (after they make a campaign contribution, of course) can run wild.

And why do alderman team up with developers to divide and conquer residents? Campaign cash! If you want to get elected, people need to know your name! And that takes advertising dollars.

One way to get around this legalized corruption is campaign matching funds.  The city of New York has done this with great success.  I won’t take any campaign donations from property developers or corporations. If we want this city to work for its residents, we need to have our campaigns funded by its residents.

After a community meeting, Aldermen Solis and Burnett promised to make that intersection safer.  Apparently, they didn’t want to inconvenience the developers because nothing changed and less than a week later another bicycle was hit by another construction vehicle. As a bike commuter for over a decade this hits close to home.

Back in 2001, a Harvard study found that our local coal burning power plants, in Pilsen and Little Village, were killing 42 people a year.  Did our alderman act decisively, use his aldermanic prerogative, and save lives? No. He took $5k a year from the company for a decade.  Every year: 42 dead Chicagoans, $5k in campaign contributions. Let me do the math for you.

If you’re tired of pay-to-play Chicago politics… If you want to fix, not just our city, but the politics in this city, then come walk around with me. Talk with our neighbors. Let’s fix this ward, let’s fix this city, and let’s save our democracy. 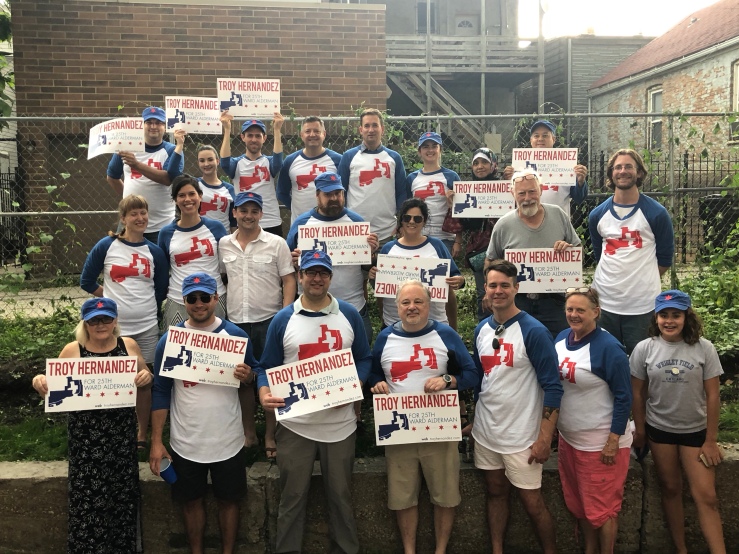